Long distance rail operator, Grand Central, is increasing the number of daily services between Sunderland and Kings Cross, from May 2022.

Tickets are now available to book online for all daily services, which sees Grand Central operate one more service, calling at its usual stations on the North East route every day of the week, including Sundays.

The additional service will bring its weekday offering to six return journeys and five Sunday return journeys from Sunday 15 May and will provide more choice for those travelling for work or leisure between North East stations such as Sunderland and Hartlepool, through York and on to the capital.

Sean English, Chief Operating Officer for Grand Central, says: “We’ve wanted to offer more services on our North East route for a while and as we build back better following the impact of COVID-19 on not only our services, but the rail industry as a whole, we’re looking forward to a positive future for Grand Central and our customers. Our value for money tickets offer our passengers an affordable way to travel to the capital and we’re thrilled to bring them even more choice of services.”

Customers can now book tickets for Grand Central’s weekday services up to 26 weeks in advance and 10 weeks in advance for weekend travel. This is the farthest in advance tickets have been available until now, offering fantastic opportunities for cheaper fares of up to 80% off. 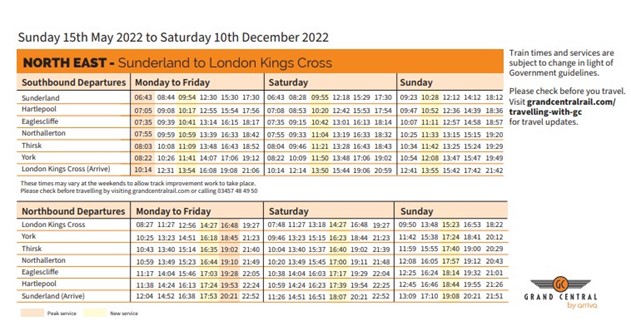